An airplane in flight is subject to an air resistance force proportional to the square of its speed v. But there is an additional resistive force because the airplane has wings. Air flowing over the wings is pushed down and slightly forward, so from Newton's third law the air exerts a force on the wings and airplane that is up and slightly backward (Figure 1) . The upward force is the lift force that keeps the airplane aloft, and the backward force is called induced drag. At flying speeds, induced drag is inversely proportional to v2, so that the total air resistance force can be expressed by Fair=αv2+β/v2, where α and β are positive constants that depend on the shape and size of the airplane and the density of the air. To simulate a Cessna 150, a small single-engine airplane, use α = 0.250 N⋅s2/m2 and β = 3.60×105 N⋅m2/s2 . In steady flight, the engine must provide a forward force that exactly balances the air resistance force.

part a) Calculate the speed at which this airplane will have the maximum range (that is, travel the greatest distance) for a given quantity of fuel.

part b) Calculate the speed for which the airplane will have the maximum endurance (that is, will remain in the air the longest time). 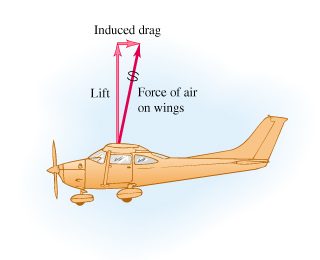