Dutch Disease is associated with a dramatic decline in the demand for a primary commodity produced by a country.

The Heckscher-Olin model uses differences in factor abundance to determine whether any nation has a comparative advantage in any good.

According to the Ricardian model, the source of comparative advantage is:

The simultaneous import and export of goods in the same industry by a particular country is known as interindustry trade.

The table below shows units of wheat and cloth produced by each worker per day in both the countries.
Table 20.1 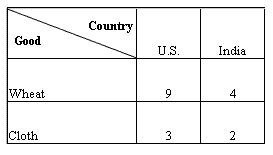 Refer to Table 20.1. Which of the following statements is true?