The America Cup yacht race is coming back to San Diego. Everybody is excited at the idea of seeing the huge, fast sailboats in San Diego Bay. Jack and Jill, friends at IGPP, are very interested in the races. Jill is very strong and athletic and succeeds in getting hired by one of the boats with an all-female crew, as a deck hand. Jack, unfortunately, has to stay on the beach. He is quite interested in keeping track of the race in real time, though, and on training days, he is on the beach in front of IGPP!

Thank goodness, they have taken the GP core classes, which allows them to make a good plan. They will each have a GPS receiver and smart phones and Jack can keep track of the latitude and longitude of the boat by receiving automatic text messages from Jill’s phone. Jack will also plot the position of the boat on a sheet of paper, and calculate how far Jill has sailed away from his own position on the beach by measuring the distance and using the scale of his drawing to transform millimeters into nautical miles. Jacksoon discovers that this is trickier than he first thought, and that the answer seems to depend on how he plots the points. So he sets out to do a simple experiment and solve the mystery.

He knows that the new AC72 yachts have enormously tall masts of height h = 40m. He has a good pair of binoculars and can detect when the top of the mast just disappears below the horizon, because of the curvature of the Earth. He also knows the radius of the Earth is R = 6,371 km. So he makes a careful diagram (attached figure). His position on the beach is point A. The position of the boat is Point B. The Earth is assumed to be spherical with center at Point O. 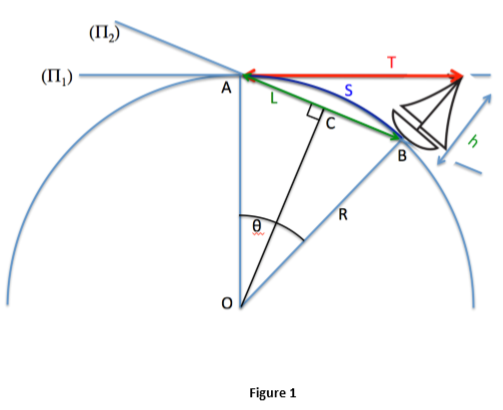 1. As he lies on the beach with his view point at sea-level, what is the geocentric angle 𝐴𝑂𝐵 = θ by which the boat is separated from him at the time when the top of the mast disappears below the horizon? Since this angle is small, he obtains θ without the need for trigonometric functions on his calculator. He translates it into degrees, minutes and seconds. Verify that the small angle approximation is justified.

2. Jack is now able to compute the distance S that Jill has traveled on the water –or would have, if she had sailed straight out!

3. A nautical mile is defined by a geocentric angle of one minute of arc. How many nautical miles is the boat from the beach at that time?

Because Jack has his coordinates and Jill’s (from text messages), he can plot his position and hers on a map. The first projection he tries is along the tangent plane to the Earth surface at Point A, his location on the beach. This is the plane (Π1) on the figure. This allows him to measure the distance T on the map (red line on the figure). Just looking at the figure, it is clear that T is somewhat greater than the true sailing distance S.

4. What is the projected distance T on the tangent plane? What is the fractional error caused by this choice of projection? What would happen if S became large (e.g. if Jill were to sail across the Pacific)?

At this stage, Jack realizes that GPS coordinates would allow him to use Cartesian geometry and compute the length of the chord AB (i.e. though the Earth instead of following the curved surface). So he sets out to plot the boat position on a map that uses a secant plane (Π2) –instead of the tangent. He now measures the distance along the chord AB as L (the green line on the figure), which is now a little bit shorter than S.

5. What is the distance L measured on the secant projection (green line)? What is the fractional error? What would happen when S becomes large? [hint: introduce Point C, the orthogonal projection of O onto the chord AB]